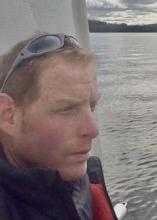 Glen has been involved in sailing as his main sporting activity from a very young age. The majority of his weekend sailing has been at LLSC enjoying the club with friends, many of whom are still at the club today. From early beginnings in Mirror Dinghies to Toppers, Contender, 505, Laser, Foiling Moths and presently enjoying sailing with Fiona his wife, and their 3 kids on a keelboat. Glen has sailed and raced around the Clyde, Oban and Tobermory, also cross channel to Ireland a few times and at Cowes. His longest passage undertaken was across the North Pacific Ocean from Hawaii to Japan.

Glen is a former Commodore and also in addition to being the Club Treasurer, is the Membership secretary.