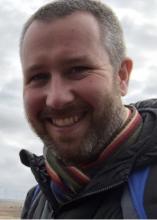 Stephen joined the sailing club as young boy in the 1980s, initially sailing a Laser II with his Dad. Over the years he has moved around the fleet with a number of 505s and an International Moth, as well as jumping in and out of other member's boats. Stephen has done a considerable amount of cruising and racing on the Clyde, and competed at Cowes week twice, represented Scotland in the Commodore's Cup in 1996 and competed in the 1997 Tall Ships race. These days he enjoys a leisurely pace with his wife Jenny and two young boys, sailing their Hawk 20 'Fineline'.

As well as being the Vice Commodore, Stephen is the club's Digital Officer.